This was such an easy choice for me this month,especially after all the internal conflict I faced when choosing last time. I decided to go straight for pleasure in the month of March; I picked things I knew I would most likely enjoy. Included in these picks are a contemporary and a mystery. 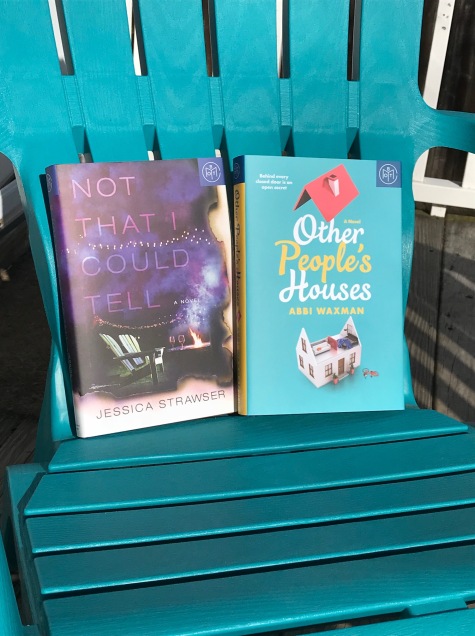 Not That I Could Tell by Jessica Strawser

I mean come on, this just sounds good. The synopsis actually reminds me a bit about Truly Madly Guilty, but the “quick take” on the BOTM site compares it more to Big Little Lies, which is what drew me in. Actually, if I really sit back and think about it a little, it sounds like a good mix of the two. I loved Big Little Lies, but didn’t like Truly Madly Guilty all that much, so who knows what will happen with this one. It just sounded like an easy read, and I like to have those at the ready, just in case I am having a hard time getting through other stuff. The cover is pretty awesome though, if you ask me, and at the mention of female friendships and wine, it was an easy choice for me.

Other People’s Houses by Abbi Waxman

At any given moment in other people’s houses, you can find…repressed hopes and dreams…moments of unexpected joy…someone making love on the floor to a man who is most definitely not her husband…

As the longtime local carpool mom, Frances Bloom is sometimes an unwilling witness to her neighbors’ private lives. She knows her cousin is hiding her desire for another baby from her spouse, Bill Horton’s wife is mysteriously missing, and now this…

After the shock of seeing Anne Porter in all her extramarital glory, Frances vows to stay in her own lane. But that’s a notion easier said than done when Anne’s husband throws her out a couple of days later. The repercussions of the affair reverberate through the four carpool families–and Frances finds herself navigating a moral minefield that could make or break a marriage.

One word drew me in to choosing this book. On both the Goodreads synopsis and the BOTM “quick take,” it describes this book as funny, which I know I could use a bit more of at the moment. It actually has come to my attention recently (thanks to my boyfriend) that I read a lot of books with sad/scary premises. He noticed, while choosing a book for me to read next, that the majority of the books I was interested in did not sound like light, “enjoyable” reads at all, which got me thinking. Why don’t I read more silly/entertaining books (not that sadder stories aren’t entertaining, just in a different way)? I did just realize that this was an exclusive for BOTM as it does not release until April 3rd. I highly doubt I will get to it before it’s release date, mostly because I haven’t read ANY of my exclusive books before their release date (oops, sorry!) but again, it seems like a good thing to have in the wings for when I need a little pick me up.

Ironically, in my last BOTM post, I talked about how I was going to change up my choosing style, and fill up my shelf with “worthy” and “timeless” reads. Both these books meet the stipulations “books that I, a) wouldn’t mind passing over for more demanding titles at the moment, and  b) would potentially want on my shelf, later in life. ” but fail in that they feel more “contemporary,” which I was trying to avoid. Regardless, I am actually really looking forward to reading these at some point, though I highly doubt it will happen this month.

What do you guys things? Have you heard of either of these books? Are they on your TBR? Let’s chat :]