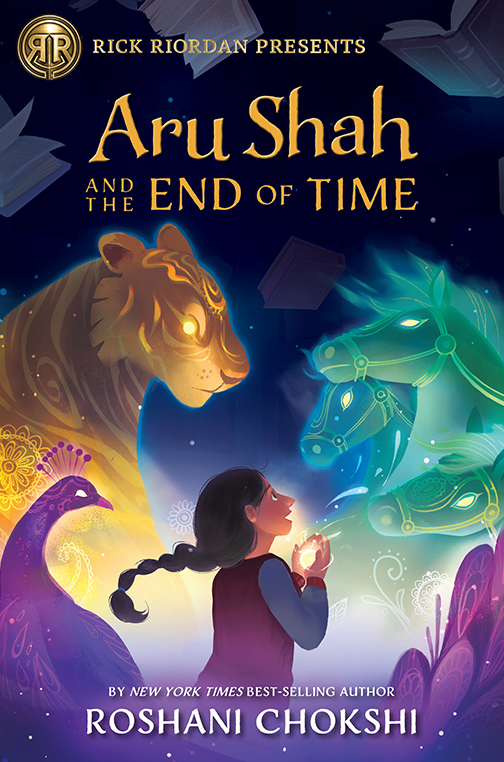 Twelve-year-old Aru Shah has a tendency to stretch the truth in order to fit in at school. While her classmates are jetting off to family vacations in exotic locales, she’ll be spending her autumn break at home, in the Museum of Ancient Indian Art and Culture, waiting for her mom to return from her latest archeological trip. Is it any wonder that Aru makes up stories about being royalty, traveling to Paris, and having a chauffeur?

One day, three schoolmates show up at Aru’s doorstep to catch her in a lie. They don’t believe her claim that the museum’s Lamp of Bharata is cursed, and they dare Aru to prove it. Just a quick light, Aru thinks. Then she can get herself out of this mess and never ever fib again.

But lighting the lamp has dire consequences. She unwittingly frees the Sleeper, an ancient demon whose duty it is to awaken the God of Destruction. Her classmates and beloved mother are frozen in time, and it’s up to Aru to save them.

The only way to stop the demon is to find the reincarnations of the five legendary Pandava brothers, protagonists of the Hindu epic poem, the Mahabharata, and journey through the Kingdom of Death. But how is one girl in Spider-Man pajamas supposed to do all that?

Can I just note how much I LOVE these dividers and how perfectly (I feel) they fit this book?

Alright, now that that is out of the way- I featured this book as my very first First Impressions Friday. There, I said I was on the verge of a reading slump and wasn’t sure this was the right time for me to be reading it. However, I powered through and ended up really enjoying this in the end. Sure! It has it’s flaws, but most of them are petty or personal and shouldn’t deter anyone else from reading this. I know personally, I would really like to own this in the future, so that I can share this wonderful, culturally rich introduction to Hindu mythology with my kids one day. Books like Aru Shah and the rest of the future books to come out under this imprint are so very important right now. I cannot stress enough how much we need new stories from different people. We need to learn and understand each other better. The world could use a whole lot more sympathy and a whole lot less hatred.

Is this book on your TBR? Have you read it yet? Don’t you just LOVE the cover? Let’s chat in the comments :]

(I am having trouble choosing, so stay tuned)