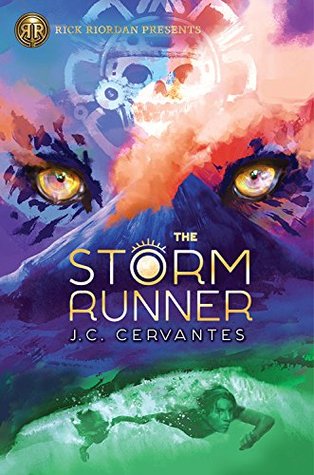 Storm Runner is available now! It was released September 18th, 2018.

A contemporary adventure based on Maya mythology from Rick Riordan Presents!
Booklist Starred Review: “Cervantes wastes no time getting right into the action, and her conversational tone and suspenseful pacing will keep the pages turning as the tension escalates and the characters face deepening stakes. A Rip-roaring adventure. “

Zane has always enjoyed exploring the dormant volcano near his home in New Mexico, even though hiking it is challenging. He’d much rather hang out there with his dog, Rosie, than go to middle school, where kids call him Sir Limps a Lot, McGimpster, or Uno—for his one good leg. What Zane doesn’t know is that the volcano is a gateway to another world and he is at the center of a powerful prophecy. A new girl at school, Brooks, informs him that he’s destined to release an evil god from the ancient Maya relic he is imprisoned in—unless she can find and remove it first. Together they return to the volcano, where all kinds of crazy happens. Brooks turns into a hawk, a demon attacks them in a cave, and Rosie gives her all while trying to protect Zane. When Zane decides to save his dog no matter the cost, he is thrust into an adventure full of surprising discoveries, dangerous secrets, and an all-out war between the gods, one of whom happens to be his father. To survive, Zane will have to become the Storm Runner. But how can he run when he can’t even walk well without a cane?
Feisty heroes, tricky gods, murderous demons, and spirited giants are just some of the pleasures that await in this fresh and funny take on Maya mythology, as rich and delicious as a mug of authentic hot chocolate.

I honestly really liked this book quite a bit. As was Aru Shah, this book reads a lot like our familiar and well-liked Percy Jackson series, so it is no surprise that this fell under Riordan’s imprint. Cervantes does a really great job presenting unknown myths, and making them feel, well, known. I loved that she includes a glossary and PRONUNCIATION key. This was a NEEDED addition to the book and I was very thankful to have access to it while reading it. I just wish that more people were talking about this! PUT DOWN DOGMAN and try this out instead! We need to get kids (and their parents and teachers) reading important content again.

Yikes! I really must have been in some slump because I haven’t posted a book review since July..SORRY! In all seriousness, you should check this book out, and let me know what you think!

It’s a mystery! I am currently unsure of what I want to pick up but You can keep your eyes on my Goodreads account because once I do choose, you’ll know about it there :]