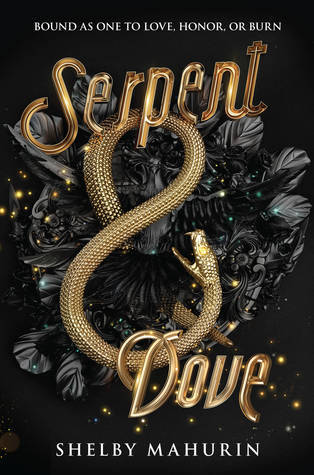 (Shelby Mahurin, 2019)
Two years ago, Louise le Blanc fled her coven and took shelter in the city of Cesarine, forsaking all magic and living off whatever she could steal. There, witches like Lou are hunted. They are feared. And they are burned.

Sworn to the Church as a Chasseur, Reid Diggory has lived his life by one principle: thou shalt not suffer a witch to live. His path was never meant to cross with Lou’s, but a wicked stunt forces them into an impossible union—holy matrimony.

The war between witches and Church is an ancient one, and Lou’s most dangerous enemies bring a fate worse than fire. Unable to ignore her growing feelings, yet powerless to change what she is, a choice must be made.

And love makes fools of us all.

Truthfully, I was really surprised by this book. I don’t typically do well with fantasy, but as it turns out, I may need to re-evaluate that mentality? Serpent and Dove is a story about a brash, vulgar Louise (Lou) who has resorted to thievery due to the fact that she is a witch and has fled from her coven. In a world where witches are hunted and burned, Lou stays undercover until an unfortunate run in with Reid Diggory, captain of the Chasseurs. Sworn to hunt and kill witches, Reid has grown up in the church, he knows nothing else. Missteps and bad luck land these two in a marriage that neither wants nor desires. Lou moves into the church with Reid and he is tasked with “controlling his wife.” Both characters (obviously) fall in love, and end up questioning their upbringing, and initial opinions on good vs. evil. Maybe things aren’t so black and white?

I am so mad at myself honestly. I try not to read series until they are all out so that I can binge the whole thing. Now I have to wait an entire year for the next one to come out. This is slated as a duology, so the second book, Blood and Honey, should be the last one in the series.