Thank you Katie from Never Not Reading for always thinking of me for anything Potter related :] I have done one other “ultimate” Harry Potter tag before this, if I am not mistaken, but this one had slightly different questions. And I mean, do I ever need an excuse to talk about Harry Potter? Didn’t think so..

I will always have a soft spot in my heart for the very first time I read about Harry Potter. I recently started listening to the audiobook for the first time, and my goodness, even 20 years later, the writing is still SO GOOD. The way in which these books were written can never be imitated or reproduced. It was, and still is, magical.

I love all the books, but The Order of the Phoenix is always at the bottom of the list for me. It’s the longest, and in my personal opinion, lacked a strong pace. Much of the plot was interesting, but at times felt dragged out. Also- Harry was a bit of a whinny prick in this one, and that was very difficult to be inside his head for that long of a book (sorry Harry).

Again, the first two movies will always be held high for me. They were the closest to the books, had my favorite version of Dumbledore (though I grew to like and appreciate Gambon’s interpretation of the character), and held the same tone and magic that the books did. I felt like the constantly changing directors (and their different interpretations) really taint the movies quite a bit. So for this one I will choose the first movie, mostly because I have every line memorized and it is where I fell in love (for the second time) with this world.

This movie. uhg, THIS MOVIE. It was the FARTHEST from the books, took WAY too many liberties, and turned one of the darkest books in the series into a borderline RomCom. There was way too much casual clothes, and unnecessary focus on subplot points that the directors of Deathly Hallows had to spend two movies filling in the blanks and fixing what this movie left out. I LOVED this book for all the backstory on Tom Riddle and the introduction to the horcruxes but this movie was easily the most disappointing to me (and ironically, it is the most played on TV- go figure).

“It does not do to dwell on dreams and forget to live.”

I have to agree with Katie on this one, Molly has to be my favorite. She is so genuine, and caring, and just a great mother. I mean, let’s be serious, it HAS to take a pretty badass lady to keep a household like hers under control. She is the picture perfect image of a mother, and exactly what Harry needed/wanted.

This is a no-brainer for sure. Hermione ALL DAY EVERY DAY. We have so much in common, and she truly was the backbone of the series (if you ask me). She is smart, sassy and isn’t afraid to stand on her own. She is possibly my absolute favorite character.

Again, I have to agree with Katie on this one. To me, Umbridge is the best villain in the series (sorry Voldy). She is so unsympathetically awful- meaning, there is never one moment in the series that I feel badly for her, not even when Harry and Hermione let her be taken away in the forbidden forest. She is a villain who jumps off the page, someone you could envision walking down your street right now. She is (unfortunately) very realistic and I just hate her.

Another no brainer guys- Harry Potter of course.

AGAIN! I agree with Katie- McGonagall is absolutely brilliant. I would have been honored to learn from her. She is one of the most interesting characters in the series, and I wish they would have fleshed out her back story a bit more. While she is known for her stern and strict teaching skills, she is also warm and caring, and took Molly’s place as Harry’s protector during the school year. You could tell that she loves her students, and that she is an awesome head of house (and future Headmistress). 11. Would you rather wash Snape’s hair or spend a day listening to Lockhart rant about himself?

I think I would listen to Lockhart. I’m not trying to touch anyone’s hair thanks.

12. Would you rather duel an elated Bellatrix or an angry Molly?

I think I’ll take my chances with a happy Bellatrix. Maybe she’ll be distracted enough for me to get away.

13. Would you rather travel to Hogwarts via Hogwarts Express or flying car?

This isn’t even a question. Always the Hogwarts Express.

14. Would you rather kiss Voldemort or give Umbridge a bubble bath?

hmm this is another tough one. What’s with all the bath related options? I think I would try to kiss Voldemort. I mean it doesn’t have to be a sneak attack, maybe he wouldn’t be so violent if he got a little love once in a while…

15. Would you rather ride a Hippogriff or ride a firebolt?

I might have to go with a Firebolt for this one. I would be too scared to ride a Hippogriff.

16. Is there a character you felt differently about in the movies?

You want to like Alan Rickman. I mean it is so hard not to love his portrayal of Snape. Snape as a character though, I have a hard time liking or feeling bad for. I mean I have more sympathy for him than Umbridge, however I am not really on that train that adores him and his love for Lily. The movies though? I feel so badly for Rickman’s Snape, mostly because I feel bad for Alan Rickman. 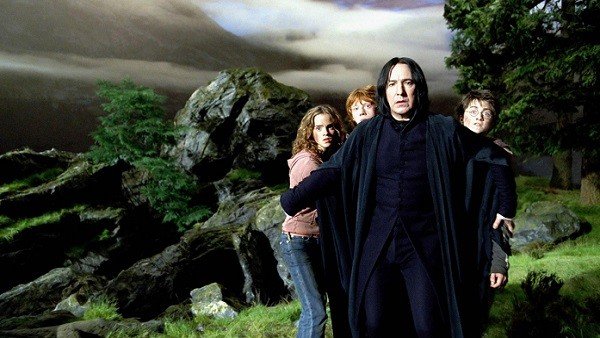 17. Is there a movie you preferred to the book?

I actually don’t mind the Order of the Phoenix movie. It is the least shown on TV (so I don’t get tired of seeing it) and they obviously had to cut a lot of the “crap” out to make it movie length so the parts they do keep, I generally enjoyed in the book as well. SO if I had to pick, I suppose I would say that one.

For the longest time, I MUCH preferred Richard Harris because his demeanor and his look was much closer to my personal idea of Dumbledore. I realize now that had he not died, and continued his role throughout the rest of these movies, that he may have been too old to properly perform at a believable level. Michael Gambon came in hot, and just never truly “fit” the role of Dumbledore for me, not until the later movies at least. He was way to eccentric for the “calm and level-headed” character. What i’m trying to say is that I don’t really have a preference anymore. I think they both did the best jobs that they could have. And I don’t think I could picture anyone else in the roles so.

19. The top thing (person or event) that wasn’t in the movie you wanted there the most.

I kind of wish Percy was more present in the movies. I thought he was an interesting addition to the Weasley bunch. I also wish that Nearly Headless Nick’s birthday party (in Sorcerer’s Stone) was in the movies. I think that would have been fun to see on screen.

20. If you could remake any of the Harry Potter movies which would it be?

Half Blood Prince. I think that they made it much too “funny” for how dark it was supposed to be, not to mention it felt like they really just threw out the book on this one, and neglected to include a lot of what I loved about the book – namely the backstory on Tom Riddle and his family.

21. Which house was your first gut feeling you’d be part of.

Ravenclaw. I just value their values and I really wanted to see myself in that house.

22. Which house were you actually sorted into on Pottermore?

Well here is the funny part. I think initially, I was sorted into Gryffindor, but I really did not feel like that made sense. I had taken a lot of sorting quizzes online and almost all of them had me in Hufflepuff. SO eventually I made a new account and retook the quiz and ended up in Ravenclaw! I still don’t know that I am witty enough to be in Ravenclaw, but I am happy, and I have completely embraced it.

23. Which class would be your favorite?

OOOH! I don’t know honestly. I think I would be like Hermione and try to take them all. I feel like despite Snape teaching it, I would like Potions though. Something about following precise directions is very appealing to me….though I hated chemistry in high school so perhaps not…

24. Which spell do you think would be the most useful to learn?

I am all for Accio. I feel like that would be the most useful spell of my life!

25. Which character do you think you’d instantly become friends with?

Hermione and I would have all the same classes together so I feel like we would get along really really well. In the very least, would could study together.

26. If you could own one of the three Hallows, which would it be?

I know the moral of the original story is that you can’t cheat death, and that attempting to will end up getting you killed anyway, BUT I have to say, I am a fan of the Elder Wand. I feel like that would be my preferred choice.

27. Is there any aspect of the book you’d like to change?

I hadn’t really thought about it until I read Katie’s answer and I have to completely agree! If Rowling had remained consistent, and Ron’s strengths (showcased the best in Sorcerer’s Stone with the chess game) grew along with the trio, they would have been much more balanced as a group, and truly NEEDED to rely on each other to defeat the horcruxes. He was so whinny and jealous of Harry as they got older that he really did nothing for himself.

I feel like Ron gets a bad rap. In the first book Rowling wrote the trio as an excellent team that balanced each other out. Ron was the strategist. But in later books (especially the fourth and seventh) he was kind of a drama-queen, and so many of his good qualities got overlooked. That’s why so many people hate him and Hermione, in my opinion.

I feel like if we had more information on the guys in the group, I would be able to make a better decision. But as it stands now, I might have to go with Lupin. I just get the feeling that James and Sirius were a kinda bullies and I mean in no circumstance would I ever like Peter, so Lupin it is.

29. If you could bring one character back to life, who would it be?

Wow, if you could bring ANYONE back? I think I am stuck in a three-way tie between Sirius, Dobby and Lily. I don’t like much of what I have heard about James, but I think I would have really liked to get to know Lily better. Sirius, before he died, was lining himself up to be a real father-figure for Harry. He was prepared and willing to take care of him, and love him as his own, and I really hate how that relationship was cut short. And I mean Dobby- he didn’t deserve to die, certainly not at the hand of a Malfoy (ish).

I mean, that’s pretty obvious isn’t it? The Hallows! 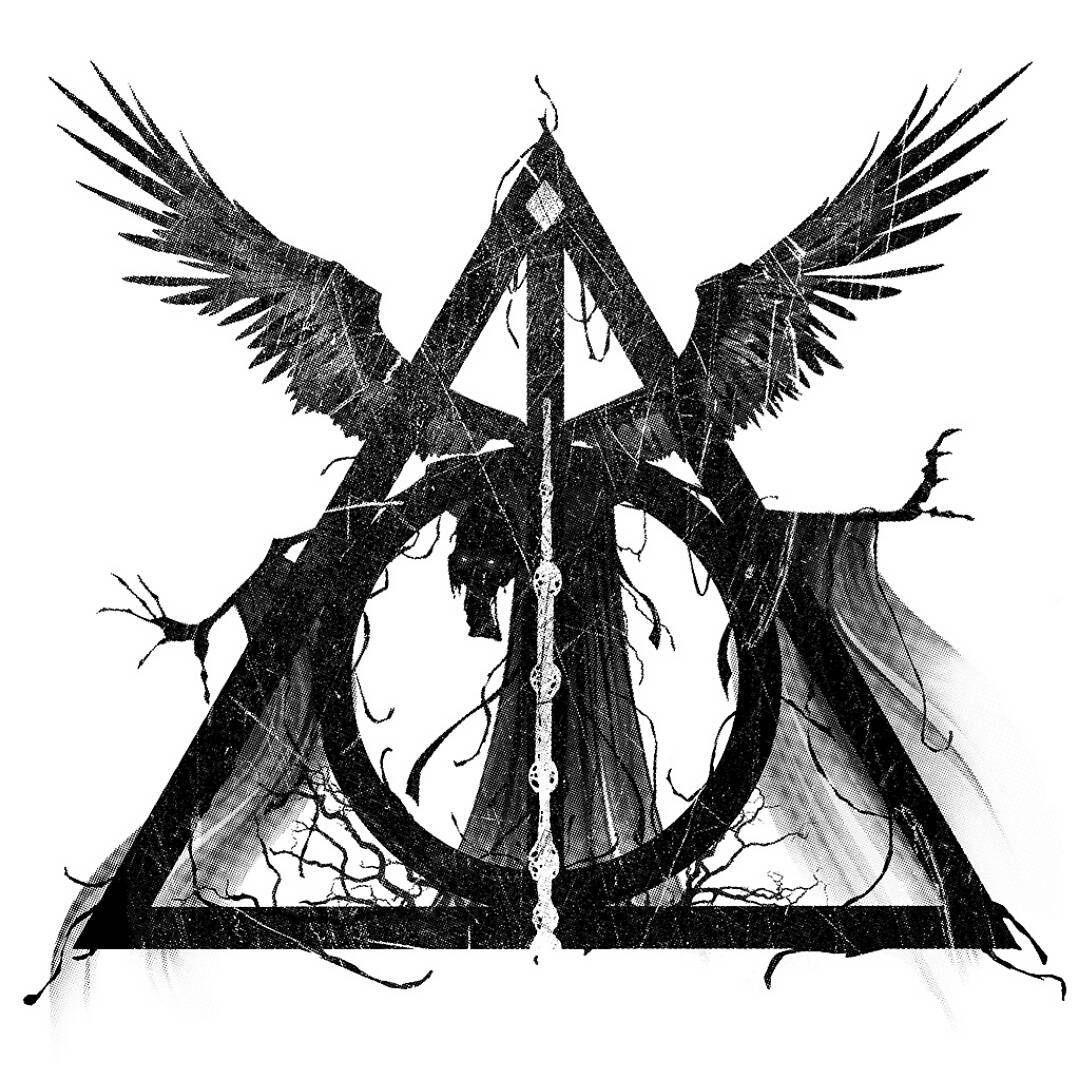 Yay! This was fun. I am now tagging all Potterheads who want to take on this ULTIMATE tag! Perhaps maybe Perfectly Tolerable?